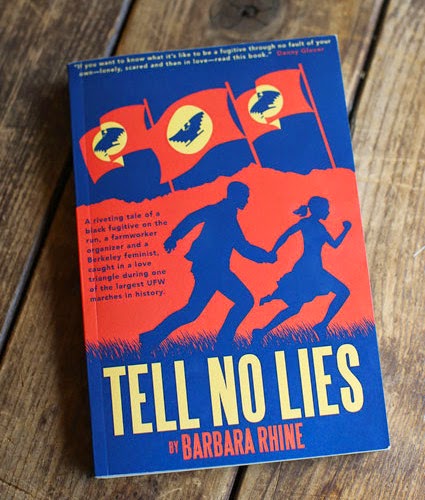 Tell No Lies is the story of three radical activists--a black militant on the run, a farm worker organizer, and a Berkeley feminist--who get caught in a love triangle during a huge United Farm Workers (UFW) march led by Cesar Chavez. During the largest agricultural strike in California history, author Barbara Rhine served as staff attorney for the UFW. She opened law offices in Stockton, Merced, Fresno and Delano, CA. Throughout the Second Wave of the feminist movement, she participated in a consciousness-raising group and other feminist activities in Berkeley. And from her college days to the present, the author has participated in civil rights causes. It is from these various milieus that Tell No Lies springs.
"Tell No Lies is a vivid account of the 1970s United Farmworkers Union. Read this novel to understand the dangers faced by organizers and all who worked with them."--Dolores Huerta, UFW co-founder and Vice President
"In Barbara Rhine's finely-wrought Tell No Lies, she illuminates life on the run, with astonishing consequences for people of conscience and commitment when hope and history rhyme. With everything on the line, she shows us the edgy and intense spaces where love might best be proved."--Bill Ayers, a leader of the Weather Underground; author of Public Enemy: Confessions of an American Dissident
"If you want to know what it's like to be a fugitive through no fault of your own--lonely, scared and then in love--read this book."--Danny Glover, actor/activist
Barbara Rhine is a lawyer, activist and writer. She blogs on books and politics and is the author of the novella The Lowest Form of Animal Life. Her articles have appeared in the San Francisco Chronicle, Oakland Tribune, Contra Costa Times, and online at Counterpunch. She is a contributor to the poetry anthology From The Well of Living Waters (2011). During her college years she tutored in Woodlawn, got arrested with Marlon Brando in a CORE demonstration against segregated housing in Los Angeles, participated in Martin Luther King’s demonstrations in Skokie, and led a hunger strike to protest the War in Vietnam.