Jane McAlevey on 'No Shortcuts: Organizing for Power in the New Gilded Age' - October 9th 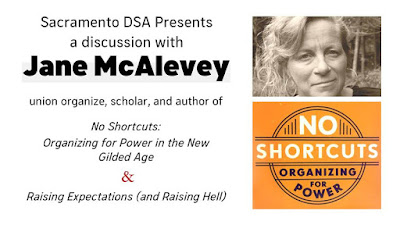 Forum with organizer, author, and scholar Jane McAlevey. Jane is the author of No Shortcuts: Organizing for Power in the New Gilded Age (Oxford University Press, 2016).

Join Sacramento DSA for a wide-ranging discussion on how we can organize for power and win in the Trump era.
Jane F. McAlevey is a Post Doctoral Fellow in the Labor and Worklife Program at Harvard Law School. A longtime organizer in the environmental and labor movements, she is the author of Raising Expectations (and Raising Hell): My Decade Fighting for the Labor Movement (Verso, 2014).


"McAlevey's decades as a labor and community organizer means that she knows what organizers do, or should do. This book lifts the lessons McAlevey takes from that craft into the intellectual realm of power and politics. This book is for anyone who wants a democratic society in which ordinary people share power." --Frances Fox Piven, author of Challenging Authority: How Ordinary People Change America

"Jane McAlevey is a deeply experienced, uncommonly reflective organizer. In No Shortcuts, McAlevey stresses the distinction between mobilizing and organizing and examines how systematic conflation of the two has reflected and reinforced the labor movement's decline over recent decades. More than a how-to manual for organizers, No Shortcuts is a serious, grounded rumination on building working-class power. It is a must read for everyone concerned with social justice in the US." --Adolph Reed, Jr., Professor of Political Science, University of Pennsylvania

"Jane McAlevey is one of the few analysts of social movements today who takes class power and class struggle seriously. McAlevey understands their ineluctable concreteness and force from years of organizing democratic unions that have effectively battled powerful corporations. This is a book for citizens and activists--but also for students and scholars of social movements--who want to understand how the world can and has been changed for the better." --Jeff Goodwin, Professor of Sociology, New York University

"Whether it is Black Lives Matter, climate change, feeling the Bern, or worker rights, success hinges on the ability to build real and sustainable power. Jane McAlevey gives us both a practical guide and a set of underlying principles to understand how organizing matters more than any other available strategy to grow power, and, what it means to organize. A must read for anyone hoping to create a better world." --Dan Clawson, Professor of Sociology, University of Massachusetts at Amherst

"For those of us grappling with the near-overwhelming difficulties of the 'how-to' of changing our workplaces, communities, and society, No Shortcuts is an invaluable resource." -- Jacobin
"The heart of No Shortcuts is composed of four case studies that show how those unions still committed to organizing have managed to do it. Some of this, like her treatment of the Chicago Teachers Union, will be familiar, but there is much that is new. For instance, her account of the heroic United Food and Commercial Workers (UFCW) campaign to organize a sprawling Smithfield Foods pork plant in the small town of Tar Heel, North Carolina a story that went largely unreported because of a gag order imposed on the union uncovers one of the most inspiring episodes in recent labor history." --New Labor Forum
"No Shortcuts outlines some of the reasons for the decline of trade union power in recent decades, but crucially it also offers solutions. This is undoubtedly one of the best books written in recent years on trade unions and should be considered required reading for anyone with an interest in tackling the decline of the labour movement." --Ruairi Creaney, Freelance Lefty