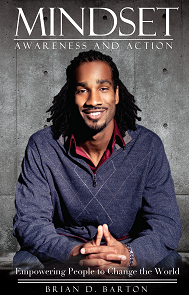 “Mindset: Awareness and Action” is a book intended to positively impact the lives of people, young and old, by enhancing awareness of the effects of societal issues. The objective is to provoke critical thought and self-recognition of the influencing factors to the mindset, suggesting a course of action to overcome and strengthen mental weaknesses while enhancing mental strengths.

Born in the heart of South Central Los Angeles, Mr. Barton currently resides in the greater Atlanta area.  After starring at the University of Miami and majoring in Aerospace Engineering, Barton signed a contract with the Cleveland Indians. After three years, he made the opening day roster for the St. Louis Cardinals and made his debut on April 1, 2008.  It was during his time in St. Louis and working with troubled youth that Barton received his inspiration to begin writing “Mindset: Awareness and Action” as well as start his foundation, “XY to the Power of Infinity.” The foundation’s mission is to build community and global leaders by empowering and stimulating youth through the introduction of travel, business ownership and public speaking.  Barton’s commitment to youth outreach and empowerment is demonstrated through his speaking engagements and school appearances.