March 28: Wendy Rouse Jorae, author of The Children of Chinatown 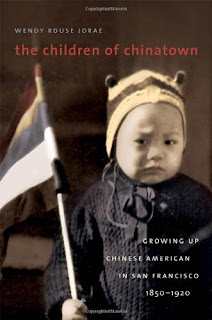 Through the untold stories of a pioneer generation of young Chinese Americans, The Children of Chinatown looks at the families of early Chinatown in the midst of efforts to combat American policies of exclusion and segregation. Jorae challenges depictions of early Chinatown as a bachelor community by showing that families--and children in particular--played an important role in its daily life: facing barriers of exclusion, cultural dislocation, child labor, segregated schooling, crime and violence, San Francisco's American-born Chinese were attempting to define themselves as Chinese-American and build a world for themselves in the margins of two cultures. Their history is part of the larger American story of the struggle to overcome racism and realize equality, and Jorae's book is an important document of both Californian and American history.

Wendy Rouse Jorae teaches history at St. Francis College Preparatory School in Sacramento; at the University of California, Davis; and at California State University, Sacramento. Copies of The Children of Chinatown are available for purchase through Time Tested Books.