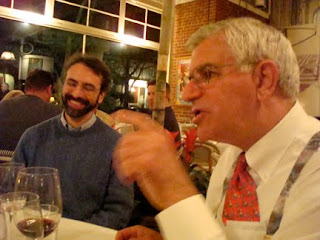 The son of Frank Corti, who with brother Gino founded world-class Sacramento grocery and wine mecca Corti Brothers in 1947, Darrell has been working with food and wine, as well as traveling the world, writing and teaching (and learning) since 1964, and is one of the planet's leading experts on all things vino. He was named a cavaliere by the government of Italy--the equivalent of British knighthood--for his pioneering dedication to and promotion of Italian wines, cheeses and olive oils, and he has been recognized by everyone from Ruth Reichl to Herb Caen to Heather Fargo for his contributions to food culture and for putting Sacramento on the culinary map in the 1970s. In 2008, after Darrell was inducted into the Vintners Hall of Fame, the rumor that Corti Bros would be losing its Folsom Boulevard lease led to an outpouring of support from the Sacramento cooking (and eating) community, culminating in a protest-cum-celebration when it was announced that the store wouldn't be going anywhere.

Darrell will discuss the rich, savory, complicated history of Corti Brothers and the state of the culinary arts today (in Sacramento and beyond) with Elaine Corn, the award-winning food journalist and cookbook author who has worked for the Sacramento Bee and in 2009 produced the excellent "Broadway: Around the World in 30 Blocks" series for Capital Public Radio.

The event is on Sunday, March 21st, at 7:00pm, and admission is free (arrive early to secure a good seat).