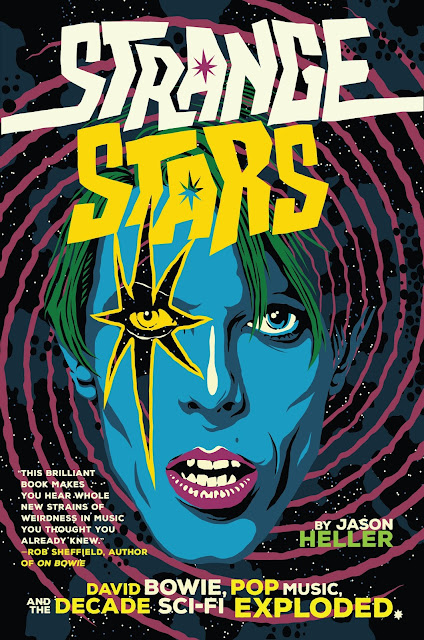 As the 1960s drew to a close, and mankind trained its telescopes on other worlds, old conventions gave way to a new kind of hedonistic freedom that celebrated sex, drugs, and rock ’n’ roll. Derided as nerdy or dismissed as fluff, science fiction rarely gets credit for its catalyzing effect on this revolution. In Strange Stars, Jason Heller recasts sci-fi and pop music as parallel cultural forces that depended on one another to expand the horizons of books, music, and out-of-this-world imagery.

In doing so, he presents a whole generation of revered musicians as the sci-fi-obsessed conjurers they really were: from Sun Ra lecturing on the black man in the cosmos, to Pink Floyd jamming live over the broadcast of the Apollo 11 moon landing; from a wave of Star Wars disco chart toppers and synthesizer-wielding post-punks, to Jimi Hendrix distilling the “purplish haze” he discovered in a pulp novel into psychedelic song. Of course, the whole scene was led by David Bowie, who hid in the balcony of a movie theater to watch 2001: A Space Odyssey, and came out a changed man…

If today’s culture of Comic Con fanatics, superhero blockbusters, and classic sci-fi reboots has us thinking that the nerds have won at last, Strange Stars brings to life an era of unparalleled and unearthly creativity—in magazines, novels, films, records, and concerts—to point out that the nerds have been winning all along.

"There's never been anything like this before—a fantastic voyage through rock 'n' roll history, decoding the sci-fi inspiration that's always lurked at the heart of it. This brilliant book makes you hear whole new strains of weirdness in music you thought you already knew." —Rob Sheffield, author of On Bowie

“Fans of popular music and sf alike will thoroughly enjoy this journey through the center of the 1970s.” —Library Journal

“Strange Stars is an ultra-engaging dive into science fiction’s impact on the rock and pop music we know and love. Heller’s exploration of where these fandoms intersect and become one is gloriously nerdy delight that expands far beyond Bowie. It connects the essential dots between the transportive work of J.G. Ballard, Jimi Hendrix, P-Funk, British New Wave, and Phillip K. Dick.” —Jessica Hopper, author of The First Collection of Criticism by a Living Female Rock Critic

“Strange Stars is full of cosmic wisdom that will open your mind to alien melodies, and also make you hear your favorite classic rock and funk in a whole new way. This book taught me so much about the science fiction influences of some of my favorite albums, but also a ton of surprising stuff about how music shaped the worlds of science fiction. A totally indispensible guide.” —Charlie Jane Anders, author of All the Birds in the Sky

JASON HELLER is a Hugo Award-winning writer whose work has appeared in the New Yorker, Rolling Stone, Pitchfork, and the Atlantic Monthly, among other publications. His latest novel is Taft 2012. He lives in Denver.
This event is FREE and everyone is invited.
at 4:34 PM