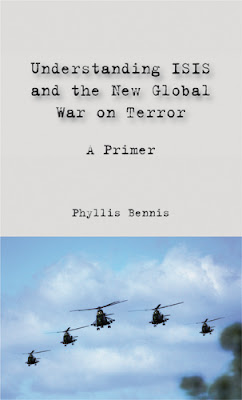 The US is back at war. A new version of what was once known as George W. Bush's “global war on terror” has become the central component of American foreign policy. The US/NATO assault on Libya in 2011, thousands of troops on the ground in Iraq, plans to keep combat troops in Afghanistan, drone wars rising in Pakistan, Yemen, Somalia and elsewhere—and now new air wars are underway against ISIS and others in Iraq, Syria and perhaps beyond.

In this newest addition to Interlink’s wide-ranging Understanding Global Issues series, Phyllis Bennis asks and answers the basic questions facing so many Americans: What is ISIS? Why are they so violent? Should Obama have kept troops in Iraq? Is ISIS the same as al-Qaeda? Can you really go to war against terror? How should the US respond to ISIS violence? What dangers lie ahead? Without jargon, in an easy-to-use Frequently Asked Questions format, Bennis sorts through the hype to get to the root of this newest edition of the continuing global war on terror.


On Wednesday, September 30, Phyllis will discuss this new book as well as the Iran nuclear deal and other current events in the Middle East and around the world.

Phyllis Bennis is a Fellow of the Institute for Policy Studies and of the Transnational Institute in Amsterdam. She writes and speaks widely on US wars and foreign policy and is the author of numerous books including Understanding the Palestinian-Israeli Conflict and Before & After: US Foreign Policy and the War on Terror. She plays a leading role in US and global movements against wars and occupation.