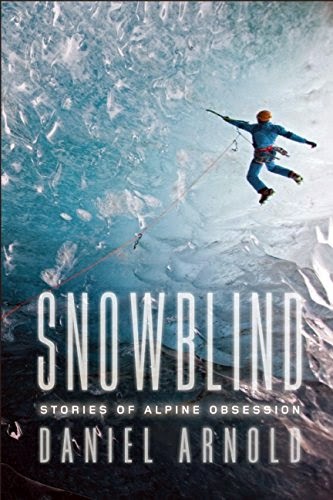 In this powerful collection, veteran travel writer and adventurer Daniel Arnold brings to life the stories of the men and women whose lives are defined by the call of the mountain. From varied backgrounds with diverse perspectives, the characters that populate Snowblind don’t feel quite whole until they’ve reached the summit of some of the world’s most dangerous peaks--an obsession that most of us just can’t fathom.
A young climber walks a hotel hallway passing rooms filled with things but no people--rucksacks, jackets, sleeping bags, crampons, and ice screws strewn across the beds and floors. Later he will explain to his fellow climbers what it’s like to take off his harness and leave his fallen partner to die alone in a blizzard. Another climber, isolated and alone in the mountains, calculates the risks of walking back to civilization after her pilot doesn’t arrive for their scheduled pickup. It’s the seemingly quiet moments like these in Arnold’s retellings that create such a satisfying tension.
Snowblind is a dose of old-world adventure writing made modern for a new generation fascinated by the mystique of climbing. For both serious climbers and those who may never use a pair of crampons, the thrill of these stories, complete with triumphs and tragedies, makes for incredible vicarious experience.
Daniel Arnold is the author of the nonfiction books From Salt to Summit and Early Days in the Range of Light. His work has appeared in Rock and Ice, Zyzzyva, The Mountain Gazette, and elsewhere. He lives in Sonora, California, with his wife and son.

This event is FREE and everyone is invited.