reading from his translation of


Like an Eye in the Hand of a Beggar


reading from her recently published translations of the work
of Zhai Yongming, one of China's leading poets,
in an award winning volume titled
"The Changing Room" 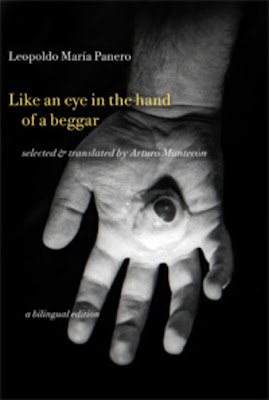 Leopoldo María Panero (b. 1948 Madrid), is known as Spain’s poeta maldito and is the greatest living poet in Spanish and the most significant once since García Lorca and Aleixandre, yet he has been virtually unknown to the English speaking literary world until recently.

Arturo Mantecón
Translator, poet, and short story writer. MA, UC Davis (Philosophy).
His short stories have been published in The Americas Review, Café Bellas Artes, Bliss, and the Dunes Review and have appeared in various anthologies. His translations have been published in Poetry Now, Left Curve, and Skidrow Penthouse. He is the translator of the work of Leopoldo María Panero, the great, mad Spanish poet. His two published books of selected poems by Panero are "My Naked Brain" (Swan Scythe Press, 2011) and the just-released "Like and eye in the hand of a beggar" (Editions Michel Eyquem, 2013).


Andrea D. Lingenfelter
Translator and Poet. MA, Yale University (East Asian Studies), PhD, University of Washington (East Asian Languages and Literature). Her translations have appeared in Poetry International Festival (Rotterdam, 2004), Manoa: Mercury Rising: Contemporary Poetry From Taiwan (2003), Frontier Taiwan: Modern Chinese Literature from Taiwan (Columbia University Press, 2001), The Poem and the World (Seattle, 1994) and Time Asia, (October 23, 2000). She has recently published translations of the work of Zhai Yongming, one of China's leading poets, in an award winning volume titled "The Changing Room" (Zephyr Press, 2011). She is also the translator of the novels, Candy (Little, Brown, 2003), Farewell to My Concubine (1993), and The Last Princess of Manchuria (1992).

This event is FREE and everyone is invited.
at 10:45 PM