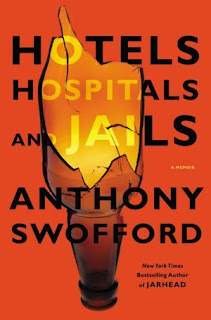 On Friday, June 8th, at 7:00pm, Time Tested Books is very pleased to welcome author Anthony Swofford for a reading, signing, and discussion of his newest work, Hotels, Hospitals, and Jails: A Memoir. The brand-new book details his struggle to come to terms with his flawed father as well as his own success as a writer living a life of excess in New York City in the years after the publication of his 2003 memoir Jarhead--during which he loved and lost, and ultimately found his way to the ultimate measure of a man: fatherhood.

Anthony Swofford was born on Travis Air Force Base in 1970. He joined the marines at age 18 and fought in the 1990-91 Gulf War with a scout/sniper platoon in the 2nd battalion of the 7th Marines. In 1999 he graduated from UC Davis with his BA in English and proceeded to graduate writing studies at the University of Iowa Writers' Workshop. His first book Jarhead, a memoir of his time in the marines, came out in the winter of 2003. A film adaptation directed by Sam Mendes was released in 2005. Exit A, his novel of military life in Japan during peacetime, was published in 2007. He has taught at the Iowa Writers' Workshop and Lewis and Clark College. HOTELS, HOSPITALS, AND JAILS will be released on June 5th, 2012, and copies will be available for purchase at the event.