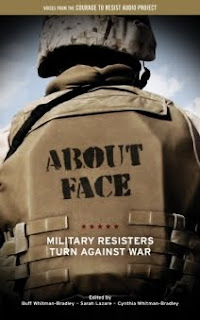 Time Tested Books and Sacramento Peace Action welcome Jeff Paterson Tuesday March 27, 2012 at 7 p.m.
Courage to Resist is a group of concerned community members, veterans and military families that supports military objectors to illegal war and occupation and the policies of empire. About Face: Military Resisters Turn Against War (PM Press, Fall 2011), is new book profiling military resisters and their couragous stances, coordinated and edited by the organizations staff.

More about About Face

How does a young person who volunteers to serve in the U.S. military become a war-resister who risks ostracism, humiliation, and prison rather than fight? Although it is not well publicized, the long tradition of refusing to fight in unjust wars continues today within the American military.

In this book, resisters describe in their own words the process they went through, from raw recruits to brave refusers. They speak about the brutality and appalling violence of war; the constant dehumanizing of the enemy—and of our own soldiers—that begins in Basic Training; the demands that they ignore their own consciences and simply follow orders. They describe how their ideas about the justification for the current wars changed and how they came to oppose the policies and practices of the U.S. empire, and even war itself. Some of the refusers in this book served one or more tours of duty in Iraq and Afghanistan, and returned with serious problems resulting from Post-Traumatic Stress Disorder. Others heard such disturbing stories of violence from returning vets that they vowed not to go themselves. Still others were mistreated in one way or another and decided they’d had enough. Every one of them had the courage to say a resounding “NO!” The stories in this book provide an intimate, honest look at the personal transformation of each of these young people and at the same time constitute a powerful argument against militarization and endless war.

Also featured are exclusive interviews with Noam Chomsky and Daniel Ellsberg. Chomsky looks at the U.S.-led wars in Iraq and Afghanistan and the potential of GI resistance to play a role in bringing the troops home. Ellsberg relates his own act of resistance in leaking the Pentagon Papers in 1971 to the current WikiLeaks revelations of U.S. military secrets.

This event is FREE and everyone is invited.
at 1:37 PM