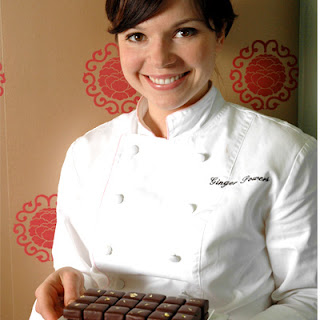 Ginger Elizabeth Hahn grew up in Camino, California, a small town in the foothills of the Sierra Nevada Mountains. She discovered early on that cooking could be much more than a hobby. At the age of 16, a summer course at the CIA Greystone in Napa Valley convinced her that working with food was her passion.

Ginger took a position at the Ritz Carlton in Chicago after graduating from the Culinary Institute of America in New York. There she apprenticed under the world famous pastry chefs. To be closer to her family, Ginger returned to California and lives in Sacramento. She was the Pastry Chef at Masque Ristorante in El Dorado Hills for three years.

In 2005, at the age of 24, Ginger opened the wholesale chocolate company Couture Chocolates by Ginger Elizabeth. The company allowed her to practice and showcase the talents and skills she had acquired, while continuing to learn and explore new ideas. Keeping up with the industry trends, she completed a chocolate science and technology course at UC Davis in 2006.

By 2007 Ginger had decided to expand her business by opening her first retail location. The boutique chocolaterie would feature all things chocolate including individual desserts, hot chocolate, cakes, cookies, chocolate sculptures, and of course a variety of chocolate confections. In 2008, Ginger launched the retail store in Midtown Sacramento under the company's new name, Ginger Elizabeth Chocolates.

This event is FREE and all are invited.

Thanks for reminding me that I wanted to get some Ginger Elizabeth Chocolate for a dear friend whose birthday is Saturday!

I look forward to hearing GE speak on Sunday.